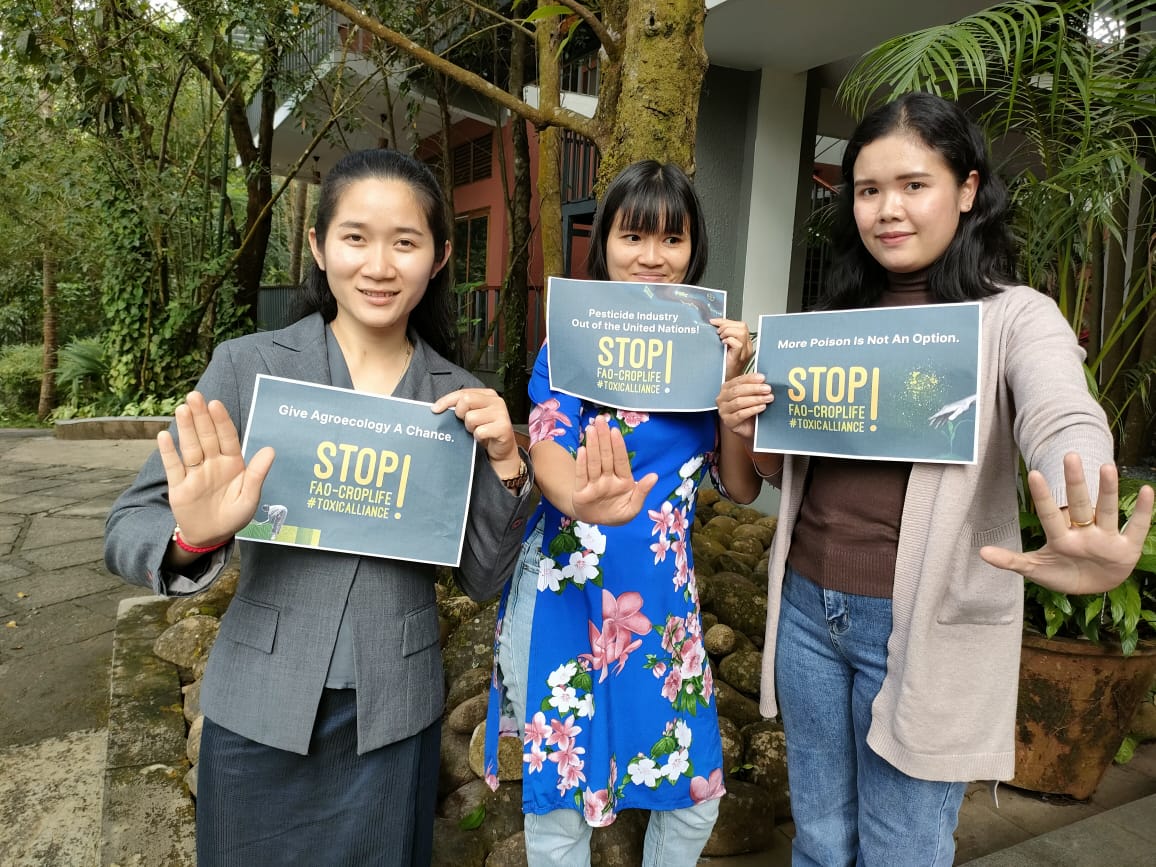 Farmers and agroecology advocates from PAN Asia Pacific partner organizations call on the FAO to stop its #ToxicAlliance with CropLife International. (Photo: PANAP)

A Letter Of Intent (LOI) signed between FAO and CropLife in October 2020 agreed to explore collaborations on broad areas of work. Backlash from 200,000 individuals from over 107 countries, over 430 civil society and Indigenous Peoples organizations, nearly 300 academics and scientists, and nearly 50 philanthropic groups, as well as the Special Rapporteur on the Right to Food has stopped the LOI from moving forward into a more formal Memorandum of Understanding. However, the LOI—which has no expiry date and did not undergo the FAO’s new due diligence process for private sector engagements—remains in place.

Synthetic pesticides are derived from fossil fuels, destroy the soil’s ability to capture carbon, release greenhouse gases, and over-all make agricultural systems more vulnerable to the impacts of climate change. They are very harmful for human health. Pesticides also play a major role in the alarming rate of global species extinction, which threatens the basis of food production and sustainable development. It is estimated that pesticides use and toxicity has to be cut by two-thirds to halt catastrophic biodiversity loss.

Civil society & IPs, which led strong demands for agroecological alternatives to toxic pesticides during the COP17 climate negotiations and the upcoming COP15 on biodiversity, believe that the FAO has an opportunity to lead the phaseout of the fossil-fuel based food system and use of agrochemicals. “We call on FAO to prioritize people-led agroecology as an innovative climate resilience solution, and ensure that the climate and science strategies do not give precedence to pesticide and fertilizer products nor private sector entities affiliated with human rights violations or environmental destruction,” the letter said.

“With planetary boundaries being breached, we urgently need ambitious targets to phase-out Highly Hazardous Pesticides. Pesticide industry influence is a huge obstacle to effective and decisive policies to address the serious threats posed by HHPs to health, livelihoods and the environment. We once again urge the FAO to uphold its independence, impartiality and integrity, end its agreement with CropLife, and lead Member States in efforts to drastically reduce the use of toxic pesticides and replace them with agroecological alternatives,” said Keith Tyrell, PAN International Chair and Director of PAN UK.

“While the private sector has been working with FAO for years, this official agreement with CropLife directly threatens FAO’s work on supporting farmers in the transition towards agroecology, while reducing the harms of synthetic pesticides worldwide. With CropLife members being the largest agrichemical companies in the world, this association is unacceptable and a direct threat to Human Rights. We once again urge the FAO to rescind this agreement,” adds Manon Rouby, Policy Officer at PAN Europe.

“As profit-driven corporations, CropLife International’s primary aim is to maximize the sales of their members’ products. We cannot expect FAO partnering with an association of multinational agrichemical giants like Bayer and Syngenta will support FAO’s goal of reducing reliance on pesticides. Reliance on hazardous pesticides undermines human rights that FAO is mandated to uphold,” said Simone Adler, Organizing Co-Director of PAN North America.

This renewed call for the FAO to end its agreement with the pesticide industry also comes two days after the 38th anniversary of the Bhopal gas tragedy in India, commemorated yearly on December 3 as World No Pesticide Use Day.###