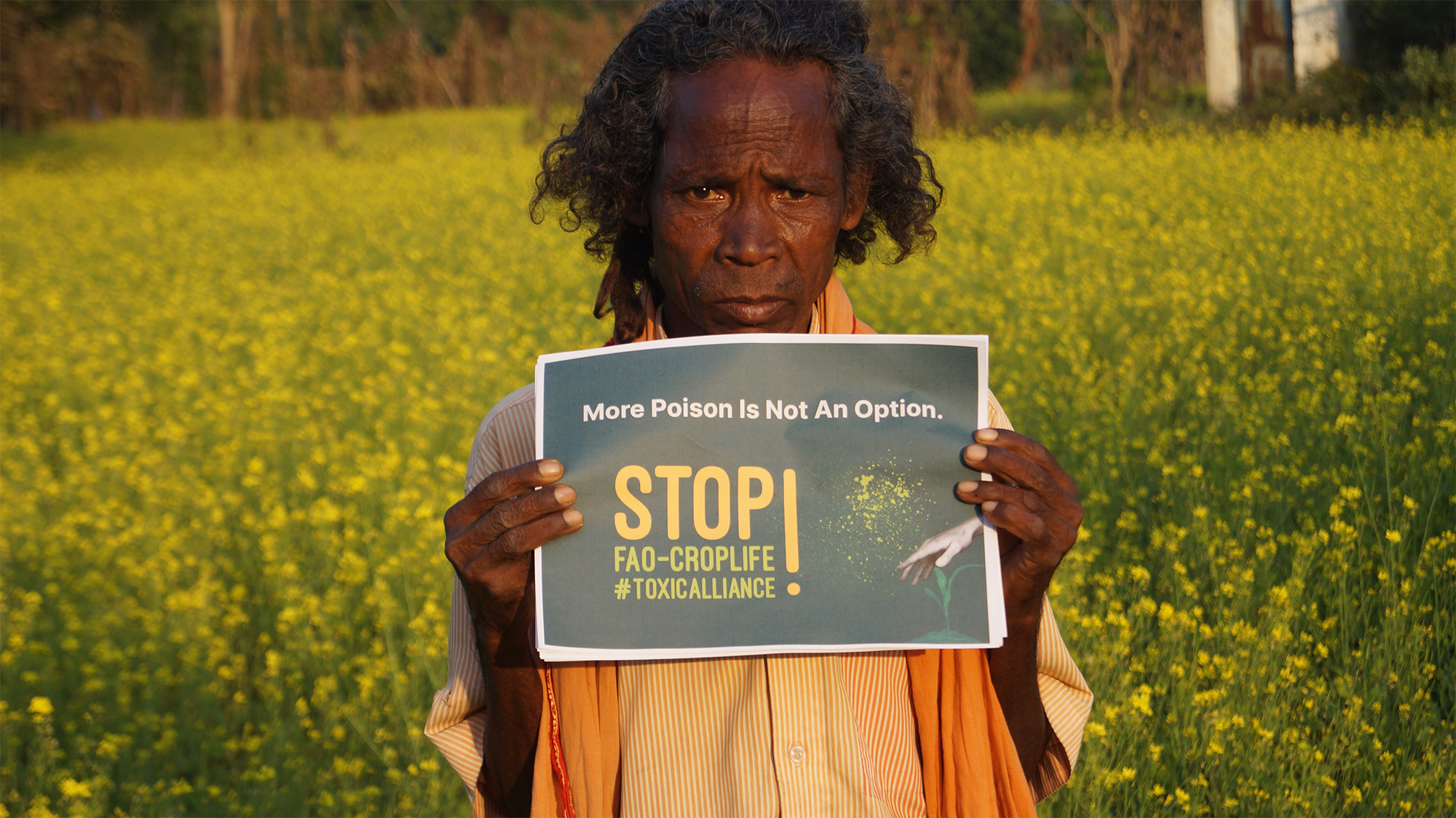 To protect biodiversity and farming based on agroecology, members of the Kondh tribal community in Southern Odisha, India, calls on the UN Food and Agriculture Organization to abandon its partnership with the pesticide industry. Photo: Living Farms

ROME, ITALY—Today, civil society and indigenous peoples organizations delivered more than 187,300 petition signatures from over 107 countries to the United Nations Food and Agriculture Organization (FAO) Director-General Qu Dongyu, demanding that the FAO end its partnership with CropLife International, an association representing the world’s largest agrochemical companies. The global petition was facilitated by Pesticide Action Network (PAN), Friends of the Earth, SumOfUs, and the Center for International Environmental Law (CIEL).

In their petition, advocates argued that it is “deeply inappropriate” for the UN agency to partner with CropLife, whose member companies (Bayer, Syngenta, Corteva Agriscience, FMC and Sumitomo) make around one-third of their sales from Highly Hazardous Pesticides (HHPs), or pesticides that pose the highest levels of risk to health and the environment.

Recent estimates show that there are 385 million cases of acute unintentional pesticide poisonings each year, up from an estimated 25 million cases in 1990. “This means that about 44% of farmers and agricultural workers around the world are poisoned each year by an industry dominated by CropLife members,” the petition said.

PAN Europe, along with other organizations, held a mobilization in front of the FAO headquarters in Rome to accompany the petition delivery and to mark the anniversary of the Bhopal tragedy, also commemorated as World No Pesticide Use Day. Advocates from around the world also participated in a Global Day of Action, including placard protests and a social media rally urging the FAO to stop the #ToxicAlliance. 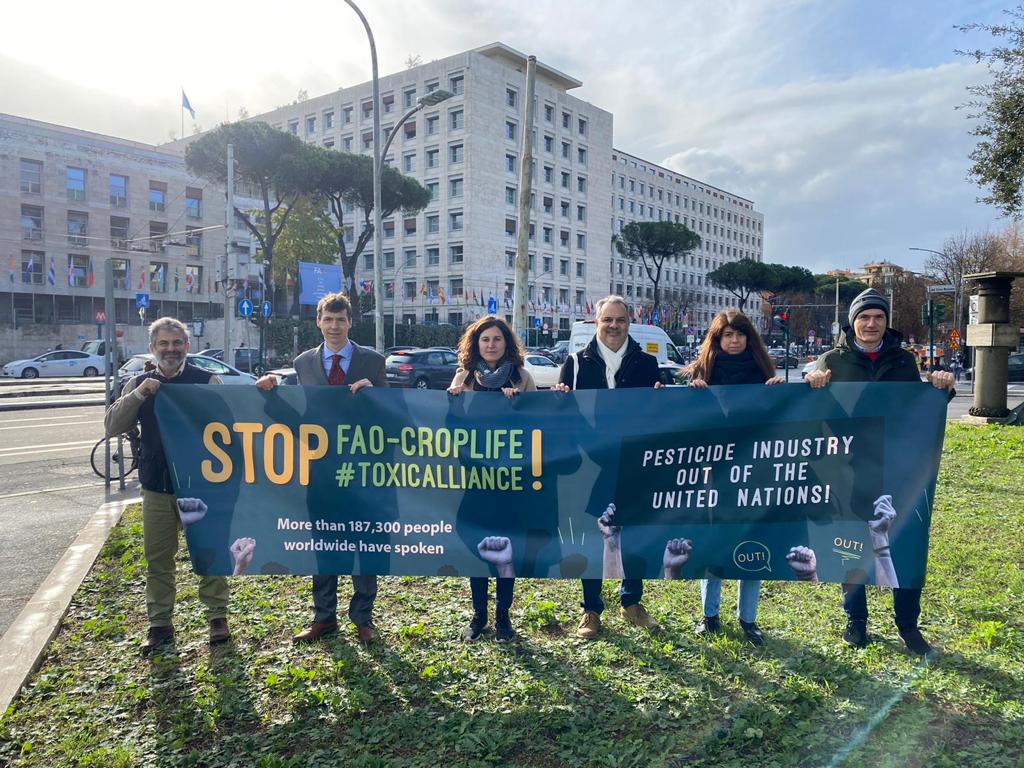 At the FAO headquarters in Rome, Italy, advocates led by PAN Europe urged the UN institution to keep its integrity & credibility by ending its partnership with the pesticide industry, along with the submission of a petition with over 187,300 signatures worldwide. Photo courtesy of PAN Europe. 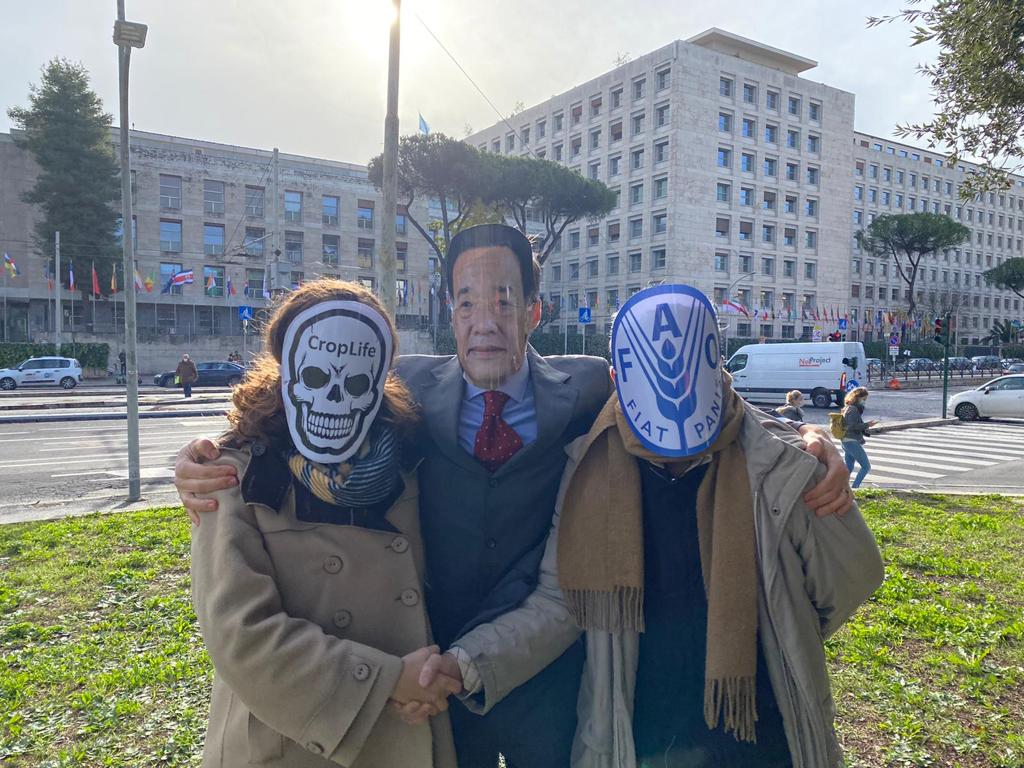 “Pesticides have disastrous consequences on people’s health and biodiversity, while science shows agroecology can feed the world in a pesticide-free manner. There is no way FAO can justify its collaboration with CropLife. We will make sure the European Union reacts to this intolerable situation,” said Martin Dermine, Policy officer at PAN Europe, who were among those gathered in Rome to urge the FAO leadership to abandon its controversial pesticide industry partnership.

“More than 187,000 people think that getting into bed with the pesticides industry is a bad move for the FAO. This partnership would turn the FAO into a marketing arm for these toxic companies whose products poison millions of farmers every year,” said Keith Tyrell, Director of PAN United Kingdom.

“The partnership between the FAO and CropLife will undermine all efforts made in Africa to ban dangerous pesticides, and will leave the door open to the export of pesticides banned in Europe such as atrazine, paraquat etc. We denounce and strongly reject this ‘Toxic Alliance’ as it is beset with conflict of interests not known to the public, to the detriment of health protection and environmental preservation,” said Maimouna Diene, coordinator of PAN Africa.

“The alliance between FAO and CropLife implies a greater influence on public policies by the companies that manufacture and sell pesticides, especially in the most vulnerable countries where the expansion of monocultures and the use of Highly Hazardous Pesticides is favored, which impacts socio-environmental health.  On the contrary, FAO and governments should favor agroecological production as the basis of a comprehensive link with the environment to achieve food sovereignty,” said Javier Souza, Regional Coordinator of PAN Latin America (RAPAL).

“FAO should not jeopardise its integrity and its achievements in agroecology by cooperating with the very industry that is responsible for the production of HHPs that are known to cause severe or irreversible harm to peoples’ health or the environment worldwide. We need a strong FAO, independent from the market interests of global corporations, and which supports the establishment of safe, healthy and sustainable food and farming systems,” said Susan Haffmans, Pesticides Officer at PAN Germany.

“We cannot expect that partnering with an association of hundreds of subsidiaries to multinational giants like Bayer and Syngenta –who have vested interests in increasing the sales of their products– will support FAO’s own goals of reducing reliance on pesticides. It is incompatible with FAO’s mandate as a UN institution to protect human rights, including the right to a clean, healthy and sustainable environment, which the UN Human Rights Council just recently recognized,” said Simone Adler, Organizing Co-Director of PAN North America.

The global petition delivery follows letters of appeal submitted by over 350 international civil society and Indigenous peoples’ organizations and 250 scientists and academics last year, after the signing of the partnership agreement between FAO and CropLife in October 2020.  A coalition of 11 global organizations, including PAN, followed up with a formal request to meet with Director-General Qu to discuss their concerns, but has not received a response to date.

“It is alarming how big business dominates in setting the direction of policymaking, as we have seen with the corporate capture of the UN Food Systems Summit. We expect that CropLife will take full advantage of this partnership with FAO to expand and consolidate corporate control over food and agriculture. We cannot just take it sitting down,” said Sarojeni Rengam, Executive Director of PAN Asia Pacific.